It’s always fun when I get to include some fellow anglers in one of these Friday Flashback posts and today’s pair go back a ways in terms of friendship. And the fishing hole goes back even a little farther than that. 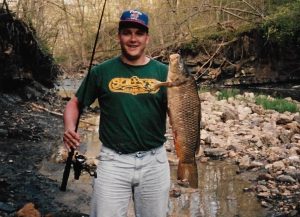 My buddy, Mark “Geek” Junk (above) made an appearance two weeks ago in the Keith Whitley flashback post and he’s back again with a quality Lake Bracken Spillway carp from this outing, one of many climbs down that old, rugged path. Been friends with Mark dating back to the early 80’s as we played some basketball together along with a year of baseball in the old Galesburg Senior League with Hi-Lo Grocery. Later we crossed over for a couple years at Knox College and even rented a house together with another buddy, Matt Reynolds, and Mark’s brother, John, in the early 90s. Plenty of tales there too but not outdoor related, which is probably for the best. 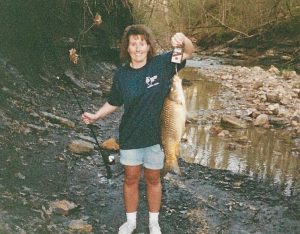 The young lady in this post, Lisa Browne, was also a companion of that crew and would become Lisa Junk not too long after this pic upon marrying Mark’s brother, John. She was also my boss at the Knox County Mary Davis Home for fourteen years even later down the road. Her prowess at the Lake Bracken Spillway, as shown here today, would earn her the questionably endearing title of “Carp Queen.” Obviously, lots of memories with these fishing partners. 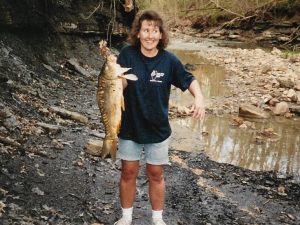 The Lake Bracken Spillway also holds a special spot in fishing lore going back to the late 70s but it was during the early 90s when it was a frequent stop. For you see, as our crew migrated from the rented house I found myself purchasing a cottage on the shores of Lake Bracken. Thus, “The Spillway” was only a handful of curves down the road and with limited responsibilities at the time, what better getaway than tangling with some of the carp that called it home.

Twenty five years later, we’re scattered about in different towns with different occupations and a combined total of eight kids. Life moves on but those fish stories and beyond live on. Talk to you later. Troy