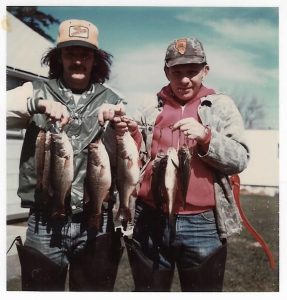 Going back a ways today to The Bicentennial with a pic featuring a pair of my outdoor heroes. The guy on the left is my dad, Terry Jackson, while the guy on the right is his brother, Richard Jackson.

There’s lots that I could say about this photo and these guys but not enough time or space. After all, a blog loses a little luster when a post turns into a novel.

This photo was shot in my uncle’s backyard in Berwick, Illinois. If you’ve never been to Berwick, you are not alone. If you are familiar with Berwick, kudos to you for getting out and straying more than a little off the beaten path.

Further off the beaten path, not far from Berwick, was a fishing hole called Griswold’s Pond, the former home to these guys’ stringer of bass. The pond drew its name from the resident, Clark Griswold. No, not the Christmas Vacation guy, but the real-life Clark Griswold. I can’t say that I know much about Mr. Griswold beyond recalling that he was a talented golfer. In fact, the landscape on one side of the pond was manicured to the point that it looked like a fairway. 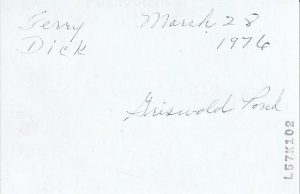 Back of the above photo

As far as this fishing trip, I’m guessing that a Rapala Floating Minnow and/or a Mepps spinner were involved. Fishing tackle was certainly a lot less complicated in 1976 and lacked the advertising hype of today’s connected society. Those two lures never needed much hype anyway. The bass provided plenty of feedback and us kids took whatever these two said to heart.

Which brings me around to saying that such unwavering and often wide-eyed trust and belief in their tales can get you fooled every once in a while. For this pair of outdoor brothers are more than prone to a little leg pulling and fish stories. From alligators in Cedar Fork to effectively running off the elephants, hippos or rhinos that used to call West Central Illinois home, a few tales are rather tall. Then again, some of their tall tales are actually true, so you just never know.

Regardless of the veracity of the stories, they have been told time and time again and are still as entertaining today as ever. And as the years have passed, it’s been a treat to watch a new generation of outdoor kids get the wool pulled over their eyes every now and then.

All part of the fun when under the tutelage of two one of a kind outdoor mentors. Talk to you later. Troy