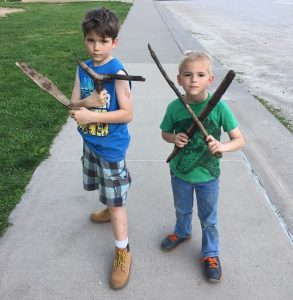 Jayce and Zac wielding a butcher knife, a boomerang, a katana and a staff

The outdoors is a wonderful place.

So is a kid’s imagination.

And when those places collide…well, it’s quite an adventure.

The wooded ravines of Wildcat Den State Park in Muscatine County, Iowa were a bit safer on this day thanks to a pair of martial artist brothers. Not only were their hands considered lethal weapons but they also managed to collect several other weapons from nature’s stash.

Who knew that lying trailside amidst the towering bluffs, along the running streams and beneath the forest canopy one would find such an arsenal?

Sadly, not a fifty year old guy more concerned with the flora, fauna and geographical features of the site. But you know, those young imaginations are more than a bit contagious.

So while I scan the terrain this spring for Virginia bluebells, bloodroot and Dutchman’s breeches I’ll also be on the lookout for swords or hatchets or spears.  All the while under the watchful eyes of my entertaining and stealthy outdoor protectors. Talk to you later. Troy