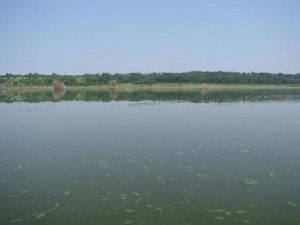 In the early Emiquon days you encountered some weird stuff. It just wasn’t normal as items that would generally either go unnoticed or be taken for granted wound up being magnified when those fish turned on. Pitfall #8 is one of those things.

Although completely unrelated to Pitfall #9, Mr. Emiquon, slime just seemed like the logical choice for a follow up. The slime in this case typically covers the fish at most places, but Emiquon can be a little different than “most places.”

After a disappointing April outing last year, Dad and I didn’t get a chance to revisit Emiquon until the first week of September. Things worked out much more favorably as we witnessed the Emiquon we’d been reading about; dozens of bass, many on consecutive casts, both of us landing fish at the same time and a lunker for icing on the cake. Now this was more like it, hauling bass after bass over the side of the boat.

Of course, along with the bass came a fair amount of water that added up over time. Mixed in with this water was also a substantial dose of the bass’ protective “slime” coating. The unique thing was that when the bite turned on at Emiquon this mixture of fluids never had a chance to evaporate during lulls between catches.

On that particular day we had hit upon a crankbait bite so there was no need to dig around in the tacklebag that sat near my feet, simply retie when necessary and keep on cranking. Therefore, it came as a bit of a surprise to find that my work boots, pant legs and tacklebag were a slippery mess when the bass finally took a break.

I now place my tacklebag a bit farther away to avoid this “situation” as I hesitate to call this unexpected sign of success a “problem.” No, the real problem occurs at other fishing holes where my gear and clothing usually have ample time to dry out.

Sounds kind of weird, maybe, but flat out hard to explain unless you’ve been in those slippery shoes. No doubt a one of a kind fishing hole that left us shaking our heads every time we hit the water. Talk to you later. Troy