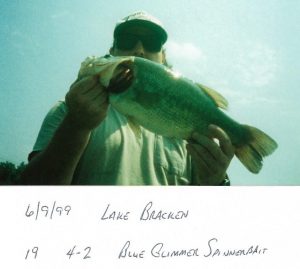 Today’s catch comes from a time when I used to have a big lake in my backyard.

Lake Bracken sits south of Galesburg, covers about 170 acres and intermittently over the course of 20 plus years I saw them all. Funny thing with this fish though is that I caught it about as far from my backyard as one could get. That particular stretch of bank running east from the lone boat ramp was always good for a few bites but this fish was easily the biggest of that bunch over the years. 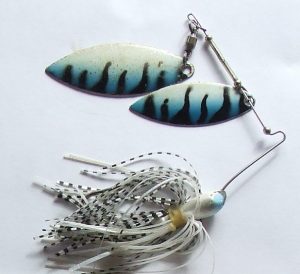 No surprise on the lure that fooled it as “The Blue Glimmer” was a Lake Bracken standout and an overall solid producer in the 90s. It has long been out of production but I do have one more left and several others that are banged up and need dressed with new skirts. I did bust one out a couple years ago at Lake Storey but sadly it lost a blade after fooling a few bass. Not sure if I’ll unveil the lone “new” one I have left or just keep it in the package for old time’s sake. 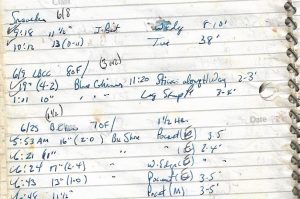 While this was a good fish, a look at the log indicates that it otherwise wasn’t a very productive outing. In fact, I only managed one other short bass during three hours on the water. Oh well, if I am only going to fool a couple bass it sure is nice when one of them tops the four-pound mark.