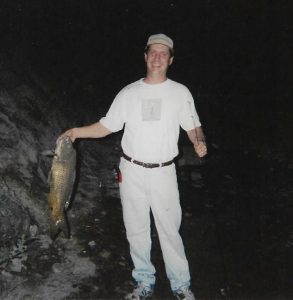 These flashbacks are always fun for me as while I have had the posts for the year lined up since February, I never really know where they will end up until I get around to writing them. In today’s case, I’m typing at about 8:30pm Thursday night on the deck with the Cubs leading the Reds on the radio.

A relaxing summer night just like today’s shots from 20 years ago. And the adventures with these friends and this fishing hole both go back even further. 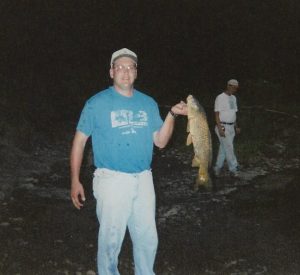 I’ve run around with some combination of the Junk brothers dating back to the early 80s. Kind of cool to say you’ve been friends with somebody for close to 40 years. In the case of the Junks in today’s flashback we’re talking Mark and Jim. These guys had it dialed in that night relegating me to photographer and eventually, 20 years later, documentarian. 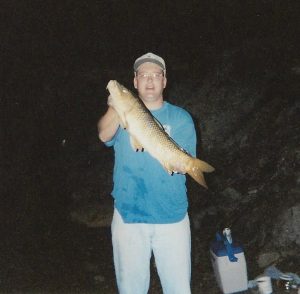 August 6, 1999 – Mark with a 6-8 carp and note the cooler in the background, fluid intake is important in the summer and we definitely stayed “hydrated” back in those days

Mark left quite a mark on the basketball record books of Galesburg High School and Knox College during the 80s and early 90s. With today’s featured catches and more than a few others he also made a splash in my family and friends fishing record book. 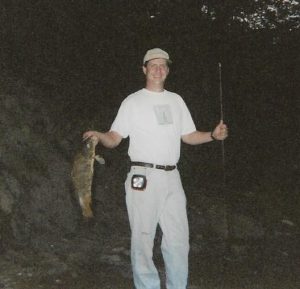 Jim has made more than a few appearances on the blog via the Top 5 with his bassing success. For today’s haul though, it is fun to step back in time to get a glimpse of him fooling some other species. 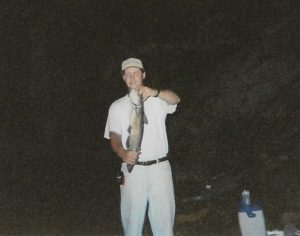 My history with the fishing hole, Lake Bracken, and more specifically “The Spillway”, goes back even farther than my association with the Junks. The best estimate would be a 1978 or 1979 visit to “The Spillway” with some Little League teammates that indeed got me hooked.

As the saying goes, “the rest is history”, a whole bunch of it. But I’ll let you go for now with the latest in the 2019 Friday Flashback series. Plenty more to go as I’ve got one for every Friday through November so make sure you stop by as we’ll have a few more guests along the way. Talk to you later. Troy