Once upon a time, those crazy Emiquon bass put a positive spin on the old saying, “When it rains, it pours.” Those head shaking bursts of feeding activity were something I referred to as “windows.” Of course, I wrote a little something about it as detailed below.

It doesn’t seem to occur as frequently or intensely as it did in 2009 but there are still occasions when the bass bite gets hot and heavy. Such bursts of activity exceed anything I’ve ever witnessed in over three decades of bass fishing both in terms of quantity and quality.

I’ve fished long enough to know that presentation and location are key. I also know that you might need to hit your “hotspots” several times during a day before finding fish in a biting mood. At Emiquon these feeding windows can be something to behold. After prodding around on some fishy looking areas and picking up the occasional bass it’s as if someone suddenly flips a switch and the bass go crazy. 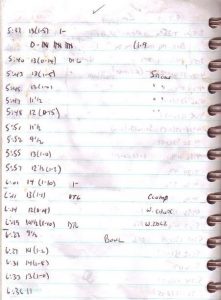 My fishing log bears out these instances and it is often quite tempting to abandon my practice of documenting the catch in favor of casting. The above page from September 9, 2009 displays the results of a feeding frenzy typical of the “old days” with bass on several consecutive casts. Mind you that the gaps are due to me wasting time writing when I could be catching. Keep in mind also that Dad was reeling in just as many if not more as I logged his success with tick marks.

Dad, Brent and I have witnessed two bass on one lure similar to numerous internet reports from other anglers. In other instances several bass have followed a hooked companion to the boat looking to get a piece of the action. On one memorable occasion I even took a break to simply sit back and watch as my brother worked his magic. Brent had the right lure in the right spot at the right time and I elected to quit casting as I punched in bass after bass on the clicker that I bring to tally such catches. Before sunset sent us packing he was two bass shy of one hundred. 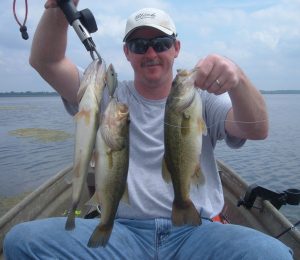 In an article I wrote for family and friends on October 11, 2009 I stated, “I would advise getting in on the action while it is hot as nothing lasts forever.” Things do seem to have slowed since anglers were turned loose on those naïve bass that spring but it’s still darn good.

As I have alluded to previously, things have gotten off track at Emiquon in terms of fishing since I wrote the pieces shared this week. I am honestly out of touch with what is going on down there in terms of management and fishing reports but understand that the once stellar fishing hole is but a skeleton of its former self.

So, why not keep the old memories rolling with an Emiquon Friday Flashback coming your way tomorrow. Talk to you later. Troy