If you fish or run around in the great outdoors enough, you will certainly log a few of those “believe it or not” tales.

And this is one of them from a place called “Sewage Lake.”

No, that’s not the “believe it or not” part. That’s actually one of my made up names from 30 years ago that still kind of tickles me all of these years later. You see, it lies below a village water treatment reservoir so I found it both apt and amusing. 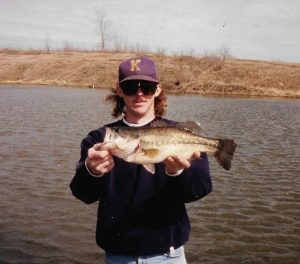 Dateline: April 14, 1995
Weight: 2-13
Lure: Spinnerbait (white)
Comments: So, this is my brother, Brent, posing with his catch from an appealing windblown point on the west side of Sewage Lake. One side of the point dropped rapidly into the main lake basin while the other side transitioned into a shallow flat. Somewhere out there on the point of this point was the sweet spot where this bass took a liking to his spinnerbait. 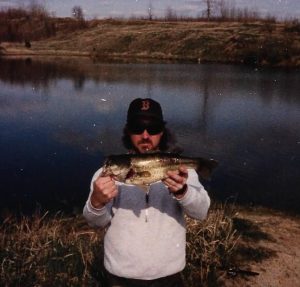 Dateline: April 22, 1995
Weight: 2-13
Lure: Jig & Pig (black/blue)
Comments: So, this is Brent’s brother, Troy, posing with his catch from an appealing windblown point…where this bass took a liking to his jig and pig.

Okay, beyond the date and the lure, everything was the same on these two days when we fished this spot together.

And when I say “everything”, I’ve long wondered if this could actually have been the same bass. After all, the same weight and caught from the same lake on the same spot eight days apart. Makes for a good fish story and flipping through the photo album it is tough to tell. 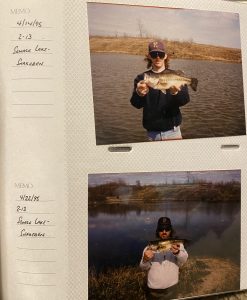 Further photo analysis through magnifying the photos on the computer, however, seems to point to the contention that these could be the same bass as more fish story than fact. As highlighted below, the tail fin on Brent’s bass has been damaged while the tail fin on my bass looks to be intact. Technology seems to dispel the potential “believe it or not” of these catches. Of course, that same technology also has the capability of enhancing a fish story through something known as photoshop.

But that’s not how Troy Jackson Outdoors rolls. Instead, we’ll leave it as this pair of bass being brothers, just like the anglers who caught them. That makes for a good fish story too. Talk to you later. Troy