The area saw some stable weather this weekend with an upturn in temps from a week featuring a couple snowstorms but still not top notch conditions. High winds also made for some challenges for those casting from the bank. Well done by the anglers below in persevering and getting one step closer to completing their Top 5. 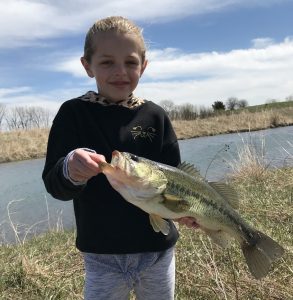 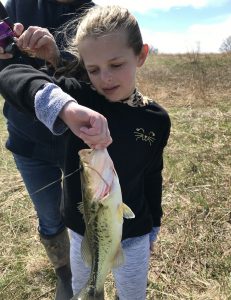 Weight: 0-15
Angler: Kennedy Jackson
Date: April 19
Location: Knox County strip pit
Lure: Senko (orange)
Angler Comments: We started out where we had good luck last week but the wind was blowing right in our faces which made casting a little difficult. We fished about 20 minutes and decided to make the hike over to another lake. Brady said he was not going to fish until someone caught a fish. It was about 2 or 3 casts and Kennedy caught the 1-13 on an orange senko with a flat tail (she picked it out herself). Brady started fishing and ended up catching one at 1-1 on the black/blue senko. Kennedy had another one at 15 oz. and she ended up getting her hair caught up in the reel handle – I’m pretty sure that is the first time that has ever happened to one of my fishing partners.
Top 5 Weight: 4-1 (1-13,1-5,0-15)

Still waiting for that run of stable, warm weather to really kick the bite into gear. A couple reports of some monster bass from West Central Illinois but overall hearing more reports of scattered tough bites. The extended forecast does show some warmer days and more importantly warmer nights on the horizon. Here’s hoping that it heats up the bite as well.

Loads of stuff lined up for the blog, just need to find time to put it together. So stay tuned and talk to you later. Troy