Better late than never this time around as the Friday Flashback darn near didn’t show up until Saturday. Been a wild week of work that wrapped up about four hours ago upon ending a roughly 1,000 mile/16 hour drive from Kinston, NC to the Quad Cities (four hours last night and twelve today). I am beat but not too beat to meet my Friday deadline. 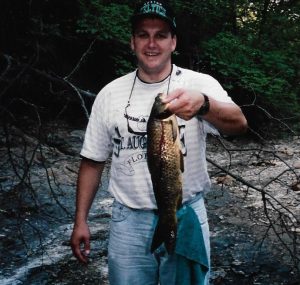 Today’s flashback takes me back to a time with far less responsibilities for a trio of more or less single guys back in 1995. Joining me at the Lake Bracken Spillway on this trip were a couple old buddies known as “Geek” and “Hack”. Throw in some doughballs and an adequate supply of Milwaukee’s Best and you’ve got yourself an adventure.

And on this day it sure was a good time as evidenced by the rewards from a pair of carp battles. 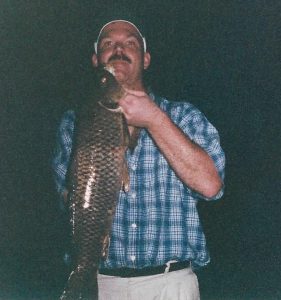 A fun outing with some good guys who I’d say are now even better. Each of us has added a better half and a batch of eight kids over the last quarter century. We’ve long scattered in different directions and rarely see each other these days but when we cross paths it’s just like old times. Can’t ask for better friends than that. Talk to you later. Troy