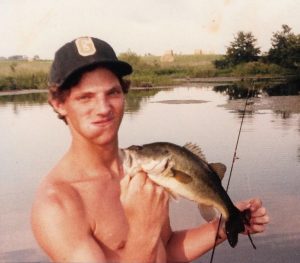 Is there anything better in fishing than getting to fish a new and unseen pond?

There’s just something about new waters that really gets me fired up. Of course, most of the time they come with tantalizing tales from folks who have already taken their shot on the fishing hole. In addition, there is often a physical description of what the pond has to offer. Maybe it’s “a batch of lilypads in one corner” or “several trees in a cove” or perhaps “a ditch that is littered with stumps.”

Whatever the case, I find that I already have a picture of the place in my mind before I ever see the water. Sometimes my vision is close, other times it’s not, but never does it disappoint as the fishing hole comes into view. 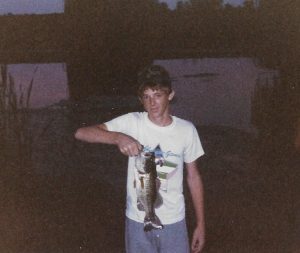 My brother, Brent, with an old school trophy from “Olson’s Pond”

Thirty-five years ago this week I was in just that sort of scenario and actually in this case it involved a pair of ponds. Dad worked at Dick Blick Art Materials in Galesburg where a young guy was working during a college summer. Blaine Atwater was a fellow Galesburg High School grad several years older than me and it turned out that Blaine’s grandparents had some McDonough County, IL fishing holes near Colchester. 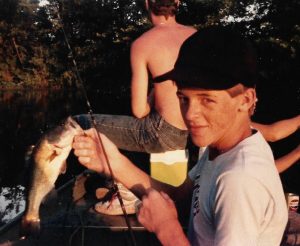 Well, Dad and Brent got an invite and brought back fish stories of some nice bluegill and several solid bass. I had just begun to think that I was some kind of bass fisherman so naturally I was quite enthused when I was invited to tag along for their return trip on July 1, 1985. Per the original log entry below, here’s how it all went down. 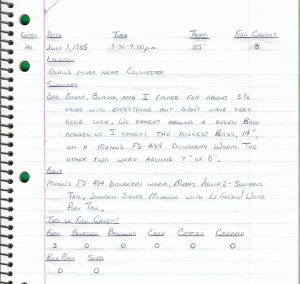 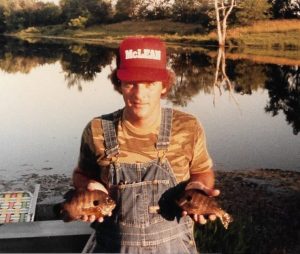 While the results of this outing were a bit of a summer dog day beat down, the pics from those days always bring a smile all of these years later. I still think about those fishing holes every time I pass through Macomb and McDonough County on the way to visit family in Quincy. As the years have passed, I’ve come to realize that the best fishing memories don’t necessarily include the best catches. Talk to you later. Troy