Well, one could start at the beginning with this series of Snakeden posts by going back to the July 1, 1990 “Grand Opening” of the site to public access. However, I was fortunate to get a sneak peek at the waters prior to that date. In fact, my first look at what is now named Lake McMaster was nearly three years prior.

You see, back in the summer of 1987 I was working for the Galesburg Park Department as a summer job. My boss at the Park was a guy named Bob who had also hired a guy named Larry who had known my Dad and my uncle for quite a few years. Larry also knew a guy named Ken who had access to the property. Larry also knew that I knew a guy named Brent who was just as into fishing as I was. This Brent guy also happens to be my younger brother, so Larry invited us as a package deal to fish what was simply known then as “The Big State Lake.”

Of course, “Big” is a relative term but for two teenagers used to fishing ponds or small strip mines out of an eight foot johnboat, the lake was plenty big and full of fishy looking structure. Not only that, but it was absolutely crystal clear, almost in an eerie way. I had never seen anything like it before and never have since.

On July 1, 1987 around 5:00pm, Larry launched his johnboat from the crude ramp for what would be a real eye-opener for the two teenagers in tow. From the log entry it looks like the initial bite was slow for me and I am pretty certain it was due to a lack of knowledge on how to fish such incredibly clear water. My standard loud and gaudy presentations that were successful on farm ponds and stained water likely only served to scare the heck out of those Big State Lake bass. 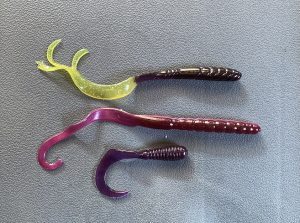 33 years later, this fishing lure hoarder still has the lures that worked on this outing

Once I got with the program in following Larry’s lead and toning down my presentation to a 3” Squirmin’ Grub, the bass tally began to rack up in a hurry. From about 7:00pm until our 8:30pm quitting time, those bass were coming aboard with regularity, including nearly every cast after about 8:00pm. When it was all said and done, our three man crew caught and released close to 150 bass in roughly three and a half hours (with Larry leading the way and likely Brent outfishing me as normal). 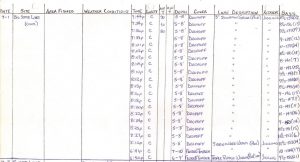 No photos exist from our “undercover” fishing mission and we landed no trophies as you can see from the log entry. And sure, that logging habit might be seen as a waste of time by some and certainly cost me more fish in the boat. But it did preserve some specific details from that old fishing trip which I find rewarding. Larry and I still correspond with fish stories old and new via email on a regular basis but this one remains one of my favorites.

More Snakeden stuff to come as three years after this fishing trip I actually had a job at what had come to be known as Snakeden Hollow. Talk to you later. Troy