The latest look back at Snakeden Hollow explores several aspects of the customary workload at the site back in 1990. I break it down into something I call the “Three Bs.” 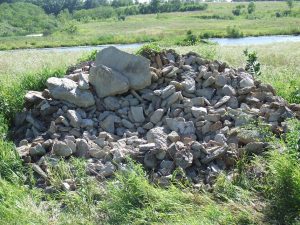 Boulders – The original landscape of the site was a batch of unkempt grasses and weeds that hid a rather remarkable collection of large rocks. Such large rocks were a danger to the blades beneath the mowing deck as our crew took the initial steps towards maintaining the terrain. As low man on the totem pole I got to spend a few hours scouting in front of the tractor in search of boulders to avoid. Currently, there are a few boulder piles onsite that I suspect we first found just over 30 years ago. 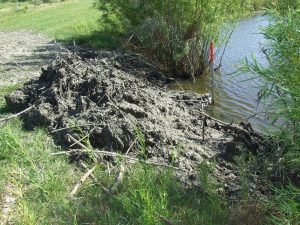 Beavers – The weirs, overflows and tubes on the numerous water holes onsite were constantly being plugged by these busy rodents. As a result, there was a constant battle to dismantle the elaborate constructions of the industrious inhabitants. It took some work to undo the intertwined collections of logs and sticks that were sealed up with a clever coating of mud and muck. I have to admit that it was kind of fun to tear up the blockages and found it quite rewarding to see the water begin to flow as we achieved our goal. And I suppose that it was a good thing that I didn’t mind the task as a couple days later, the beavers, and the crew, were at odds once again. 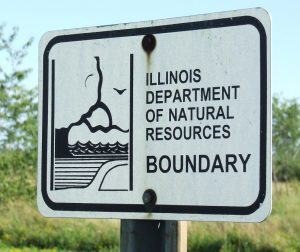 Boundaries – I also found the task of identifying the specific site boundaries to be rather enjoyable. It was kind of like a treasure hunt as we were armed with some sort of plat map that guided us to the survey pins, most of which were quite remote. Several survey pins were marked with a plastic tag while others were simply a thin metal pin pounded into the ground “forty feet due east” of whatever landmark was noted on the plat. There was a sense of satisfaction when you were the guy with the “Eureka moment” as a result of stumbling upon the survey pin. Once the boundary point was established it was not quite as entertaining to manually pound a fencepost and affix the old Department of Conservation sign. I wonder if the remote ones have been replaced with Illinois Department of Natural Resources upgrades. If not, I suspect that there are many places at Snakeden where no one else has set foot for over 30 years.

Perhaps rather mundane tasks but ones that were necessary in the formative months of Snakeden. No matter how many more years I may continue to hike through the site I will always have an appreciation for its boulders, beavers and boundaries. Talk to you later. Troy