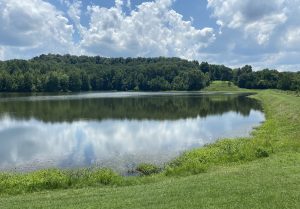 With a work trip to Georgia that required driving, I figured that I would pack along some fishing gear just in case. My plan was at least one brief stop during the substantial portion that covered Illinois and I was able to get it done. But, did I catch anything during my “lunch hour” on the way home? 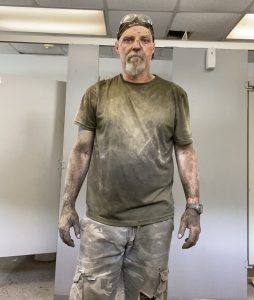 Figured that I’d earned a fishing “lunch break” after a couple 12-hour days of this. 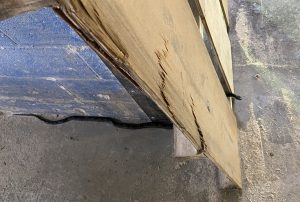 Did see some wildlife on my work detail installing IT equipment.

Birthday Trip – Once upon a time, I tried to make it a point to get on the water on my birthday. Well, things are a little more complicated these days between work and family so it just doesn’t always pan out. In fact, this year I celebrated my birthday in Georgia on a work assignment. However, I did have some poles in tow for the lengthy stretch of the drive through Illinois (didn’t make financial sense to buy any sort of out of state permit) and briefly hit the water on my return home the day after my birthday. 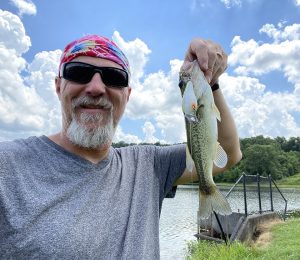 Belated Birthday Bank – I had a couple spots in mind to possibly try my luck from the bank that weren’t too far of a detour from my route. One was Rend Lake as I have never wet a line in the second largest man-made lake in Illinois. However, upon spotting a sign for Ferne Clyffe State Park on the way down it brought back memories of a southern Illinois trip with my wife back in the early 2000s. I recalled that the small lake on the site offered some solid bank access, a bit of riprap and relatively deep water along the dam. It turned out that my memory served me well as it was just as I had pictured. 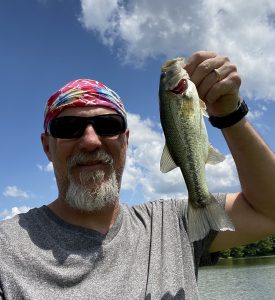 Belated Birthday Bass – Roughly 15 minutes of burning a Red Eye Shad over the riprap breakline along the dam failed to produce any bites in the blistering midday heat. Plan B consisted of going a little deeper and a little slower with a KVD 2.5 Squarebill crankbait and after only a handful of casts I had a bass. Another joined the log a few minutes later along with some sort of unidentified panfish (thought maybe a warmouth). But I wasn’t done quite yet. 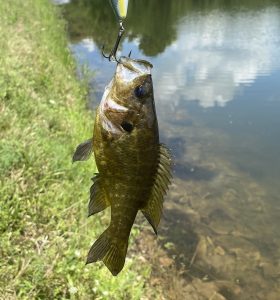 Still not sure what I’ve got here, any suggestions?

Belated Birthday Bonus – Only a few yards down the bank from where I started, I spotted a catfish rooting amongst the riprap in about three feet of water. I pitched a Havoc Pit Boss in front of the fish and got it to pick up the bait twice. The second time it seemed that I had the fish hooked but it came loose and then disappeared into the depths. I gave the spot a rest and returned about twenty minutes later to find that the catfish had also returned (I am guessing guarding fry). This time I switched to a wacky rigged white Senko as I could not only see the lure better but also increase my odds of hooking up with an entirely exposed hook. Sure enough, I pitched out the worm and shortly saw the white lure completely disappear so time to set the hook. A brief battle ensued before I had a nearly three and a half pound channel cat in hand, the first catfish I have caught in a long time. And sight fishing of all things. 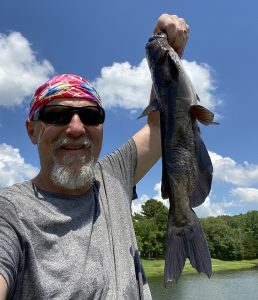 2:03pm An entertaining and unexpected catch

All in all, a fun “lunch hour” to break up the nine and a half hour drive I had from the previous night’s stop in Kimball, TN. No trophies, but hey, mission accomplished with a short fishing outing a long way from home. Talk to you later. Troy