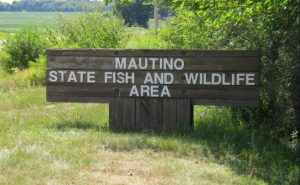 I had a decent day on some Bureau County, Illinois waters just before the decision was made to limit access to the site due to deteriorating interior roads. From what I can gather on the internet, it appears that the road work was finally completed last summer after roughly five years. Perhaps I will take a drive later this year, but for now we just head down Memory Lane with some stats and excerpts from the original fishing report.

Between work, softball practices and games, soccer practices and games, Tae Kwon Do lessons, year-end school functions, birthday parties, graduation parties, a JDRF walk-a-thon, several field trips and a Heart concert with my daughter, Carly, it has been a crazy month since my last chance to make some casts. Why, in the first 21 days of May leading up to this fishing trip I counted 44 different items on the calendar. No wonder me and Julie are so tired. And, by the way, thanks to her for taking one for the team so I could get out and make another fishing report. 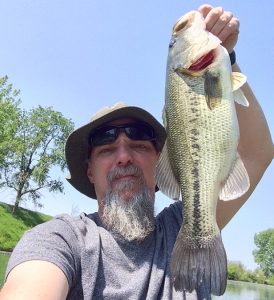 Mass Bass – This year I’ve gotten into the habit sending picture updates to Julie while I’m on the water kind of like the real Bassmasters do these days. She says she enjoys following along whether I’m outsmarting a few or vice versa. Well, on this outing I received a text regarding the wiseness of sending fishing pictures while the rest of the crew was attending Mass. It briefly had me worried about the source of the text, but I did verify that it was sent by Julie as opposed to coming from upstairs. And just to clarify, Julie asked that I point out that she was not checking updates until after Mass had finished. 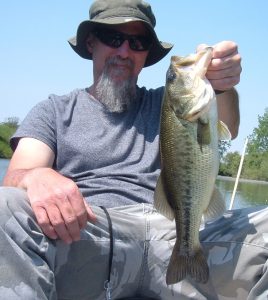 One That Got Away – My first stop featured five bass all 10” or less and lake number two was a murky water bust, throwing me a shutout so I bailed after an hour. Ten minutes into my final stop I set the hook on a Senko wacky rig on something that did not move…initially. However, when it did there was one drag stripping run followed by a second line busting burst. I use ten-pound mono on a spinning rig for my wacky rigging and this is the first time I recall it coming to such an end, but it happens. I’m torn whether it was good or bad that I didn’t get a look at the fish. Fortunately, the 3-9 and 2-12 over the next forty minutes or so helped to soothe the pain. Those fish also helped to boost my Top 5 weight to 17-1 but left me wondering what might have been in terms of achieving my annual goal of a 20-pound limit. With my lowest bas at 1-13, the one that got away would have needed to weigh 4-12 to get me there. I’ll never know, and, of course, that fish can be as big as my imagination. In all honesty though, after thirty plus years of catching bass, I am positive that it would have made the mark with room to spare (what am I supposed to say, right?). 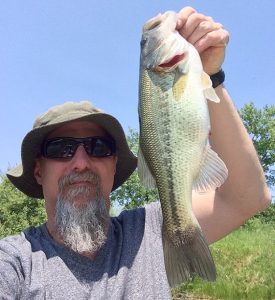 Not sure what’s on the horizon for that June bass outing but sounds like there’s some panfish to be pursued with the kids. Julie replied to one of my on the water text updates that our oldest boy, Jayce, stated that he “wants to go next time, he is old enough.” I jokingly replied that he must be seven years old as that birthday rolls around this Saturday. Cool though, that he is interested and wants to hang out with his dad. However, Julie also reported that Jayce didn’t even realize that I wasn’t around all morning until they got to Mass, and he asked, “Hey, where’s Dad?” Geez, Julie steps down to the basement to do laundry and everybody around here freaks out wondering where Mom went. I get it, Moms rule.

Not sure if I will be able to get out this Memorial Day Weekend but we do have some outdoor stuff on the horizon in June that should make for some interesting blog fodder. In addition, we have at least one bass for a Monday Top 5 Update so stay tuned. Talk to you later. Troy