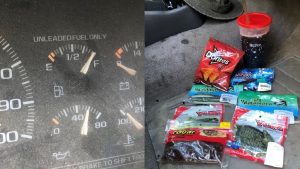 Fishing is one of those hobbies that can be as expensive and time consuming as you choose to make it. And when you find a crazy fishing hole there’s a little more leeway in making the investment.

This pitfall is twofold; time and money, both of which I typically have little to spare.

The two and a half hour round trip cuts into my time on the water and can make for a long day when I have an opportunity to leave early and stay late. Don’t get me wrong, I can still fish all day; it’s the next day where there are some occasional technical difficulties. I’ve also gotten spoiled by the proximity of my regular spots (roughly 25 minutes to Little John Conservation Club or Snakeden Hollow and less than ten minutes to Lake Storey). Sure, exotic locations have beckoned over the years but as far as day trips this distance is probably pushing my limit. And was it not for the insane bass fishing that took place down there last year I might not have made multiple visits (but that’s a discussion for another Potential Pitfall).

Travel also translates to money in fuel costs so even if I had routine chances to fish Emiquon I’d still spend most of my time closer to home. I usually pack a lunch but the occasional stop at the convenience store can also run up the tab. Of course, having complained about cost, I will admit that Dad typically foots the bill when we fish Emiquon together (once to the tune of nearly $300 for a replacement trolling motor as detailed in my April 22nd entry “Emiquon – Three Dollars A Bass”).

Finances can also be an issue if you prefer soft plastics. I’ve had days where the bass have run me through a fair amount of baby brush hogs, wooly hawgtails, wooly curltails and such. My Senko setup allows me to catch multiple bass on each bait before it eventually gives out but the dollars still add up on a good bite when paying around eight bucks for a ten pack. My advice is to find a knockoff imitation and see if it will work so you can save the pricey stuff for somewhere else. Along those lines I also leave the tungsten weights in my tacklebox and stick with brass or lead. I once calculated that while the tungsten weights were roughly ten times more expensive than conventional weights the naïve Emiquon bass of 2009 were easily ten times dumber than normal bass. Thus I still hauled in numerous fish and did not have to shed a tear when busting off on the occasional snag.

I enjoy fishing creature baits, finesse presentations and definitely a wacky rig but if I had my way I’d just as soon run into a crankbait bite at Emiquon like we did last fall.  As long as you check your line for abrasions, retie when necessary and keep an eye on your hooks you can just keep casting and catching at virtually no extra cost in time or money.  The chipped paint and scarred lips are simply the hard earned battle scars of success; which oddly enough leads right into Potential Pitfall #4.

Having added another hour and a half to the round trip in moving to the Quad Cities back in 2014, the cost has outweighed the reward over the years. Maybe someday, but for now reminiscing will have to suffice. And speaking of, Friday Flashback coming your way tomorrow. Talk to you later. Troy