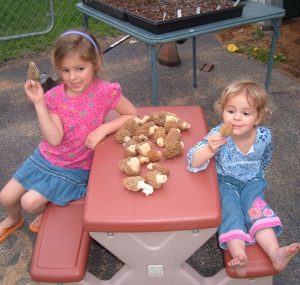 As a mushroom hunter I’m not what one would term a success. A couple noteworthy finds over the years but generally speaking if I can hit double digits I’m lucky. Today’s flashback got it all done at once as noted below in a morel wrap-up from 10 years ago this week.

While approaching the entrance to Banner Marsh we spied a pair of mushroom hunters. From the looks of their grocery sacks (should use mesh bags by the way) it appeared that they were enjoying some success. A co-worker also reported finding around five pounds in the Wataga area this past weekend.

As for myself, I actually found a couple dozen during a few hours roaming Little John on 4/29. Fifteen good sized ones came from one spot including ten that were growing together in a clump. I’d never seen that many clustered so close together and considered leaving them so someone else might also enjoy the spectacle. Okay, maybe not. I did take a photo to share the find with others and then picked them so I could also share them with my family. Considering my past morel history, I guess it’s already a banner year. 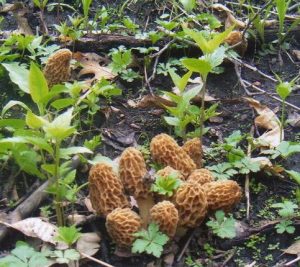 Even I couldn’t miss this clump of ten morels

Well, that’s probably as close as I’ll get to mushroom hunting this year as just too much other stuff going on. Definitely enjoyable roaming the woods but going to be spending time instead prowling the ball diamond as an assistant coach and if I do find free time I am one to choose fish over fungus. Talk to you later. Troy