November has not been particularly kind to the region in terms of weather. Beyond one decent Saturday, the temps have been well below normal. Unfortunately, that has likely put an end to the casting for one blogging angler. But, a couple welcome texts from our Top 5 leader last week showed that some bass were still interested. 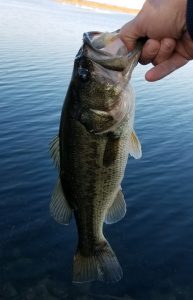 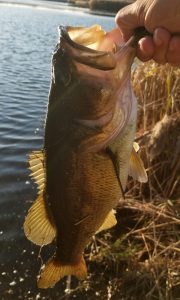 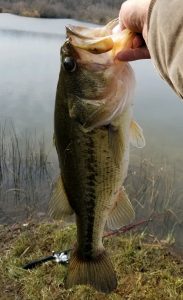 Weight: 5-1
Angler: Jim Junk
Date: November 10
Location: Knox County private strip mine
Lure: Chatterbait
Angler Comments: Throw far, let it sink and retrieve as slow as I could…just fast enough to feel the blade moving. Picked off a couple in the pound range and was having fun. Few casts later, could tell that I set the hook on something pretty decent. As he got closer, I saw his mouth and thought real possibility of being 5-plus. Good fight and landed without much trouble.
Top 5 Weight: 24-14 (5-3,5-1,5-0,4-14,4-12) culls a 4-12

Way to go, Jim. Just when I wonder if we’ve seen the final boost to our leading creel, another outstanding catch comes our way. As I was corresponding with fellow Top 5 angler, John Kirkemo, yesterday I gave him a heads up that Jim had a special catch to bump up an already impressive stringer. John responded, “Unbelievable. That guy never quits!” Yep, what he said. Talk to you later. Troy