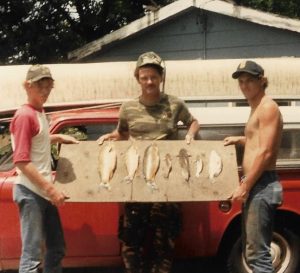 It’s tough to beat a creek, no matter how you navigate those flowing waters.

In the case of today’s flashback, however, we are sticking to what was called a “float trip.” A float trip involved floating a stretch of creek via some sort of watercraft. In our case, this was either a canoe or that old, eight-foot johnboat that is still rowing strong. In most cases, the first stage of a float trip was to leave a vehicle at the takeout point and then drive another vehicle and watercraft to a launching spot. From the launch, we’d float downstream to one vehicle, load up and then drive to pick up the other vehicle.

The pictures above and below are from a 1986 float trip on a portion of Henderson Creek located in, oddly enough, Henderson County, IL. Dad, Brent, and I were involved in this float, and it looks like we borrowed my uncle’s truck as the additional vehicle. I guess he was the odd man out on this trip as Dad had two boys who could drive by that point in time. Our haul appears to be some carp, small channel cats and a drum. No trophies, simply icing on the cake for a fishing adventure. 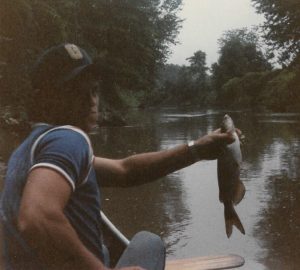 Summer 1986 Float Trip – a creek, a canoe, a catfish and a big chaw of chew (glad I kicked that habit)

Speaking of fishing adventures, the pic below is one of my favorites. Dad and I hit a Warren County, IL spot that we called “Beefy’s Creek” as that was the fellow’s name who provided access. Well, I don’t think that was his real name but it all makes for a better story anyway. On this float trip, we only took one truck as we were able to dump the boat and gear, drive to a takeout spot and walk the cornfield back to our “launch.” I recall having to drag the boat through some sandbars and over a logjam more than I really remember what we caught. 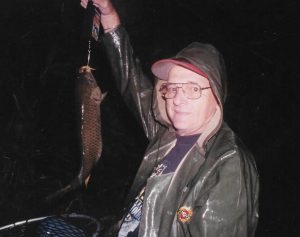 However, the highlight of the trip was a severe storm that hit the area as we were stuck down in that secluded creek bottom. We even pulled the boat ashore at one point and hid under the bank as the storm raged and we wondered what in the heck we were doing out there on the creek. While the picture of Dad looks like we were night fishing, it was probably taken about 8:00am, that’s how ugly the sky got during the storm. Apparently, Dad was somewhat prepared as he is decked out in raingear. In contrast, the photographer, yours truly, was wearing a garbage bag.

Anyway, we weathered the storm, caught some fish, and made it back to the truck. However, the torrential downpour left us wondering if even four-wheel drive was enough to get us back up the saturated, muddy lane to the gravel country road. Dad locked her in, we crossed our fingers and luckily, no problem, we were on our way home.

We no longer have access to these creeks or any others, but we sure made some memories to last a lifetime. Perhaps I should look into some waters to float with my boys one of these days although I wonder at times if I could still hang with such adventures. Then again, Brent and I have pulled off a couple questionable stunts over the last several years so maybe we’re not done quite yet. Talk to you later. Troy