What’s a year of fishing without some partners to share the adventure and make some memories?

Primarily, those partners were family. The year started with my brother, Brent, and I hiking into Snakeden Hollow just like we’ve done for over 30 years. As spring rolled on, I got my boys, Jayce and Zac, dialed in to some strip mine fish. We later joined forces with Papa and some waxworms to fool a batch of Lake Storey bluegill. During the summer, it was good to get Dad back out in the big boat for some bass fishing al Lake Storey and Little John, spots we’ve fished together forever. Brent and I also prowled the strip mines on several occasions and Jayce and I joined up with Jim Junk for a morning adventure as well. Fall found me on Lake Storey with Brent and crossing paths with my friend, John Kirkemo, whom I have corresponded with on and off the water for several years. John and I also swapped fish stories and more on a couple occasions including an entertaining night around the campfire with my family.

Plenty of highlights but I must say the trips with my boys are a trip. Somehow, we wind up with a focus on sustenance both before and after we focus on the fish. The menu included Oreo Bites, Takis, Hot Fries, beef jerky, sodas, chocolate milk and a Culver’s drive thru. Long ago, I learned that’s what dads do as part of the outdoor adventure. However, when I was kid, the closest thing to a convenience store was The Trading Post in Monmouth which was always good for a soda pop and a bag of Sterzing’s potato chips. Of course, there’s also some bloopers, some trash talk and some entertaining conversation ranging from Fortnite (a video game) to Mr. Beast (a YouTuber) to superheroes to flatulence and more.

Lots of fun as we created a new batch of memories and fish stories.

In closing I would like to give a shout out to an old fishing friend who unexpectedly passed away last August.

RIP to my old friend, Larry Smith (1949-2021). I’ve known Larry and shared fish stories with him since the 1980s. He was the guide for me and my brother, Brent, in July 1987 when we first set eyes on an unnamed and off-limits lake that would later become Snakeden Hollow’s Lake McMaster. For the last dozen years, Larry and I have swapped fish stories via email and crossed paths on an old favorite fishing hole, Lake Storey. We could have easily written a book with the hundreds of longwinded, rambling emails over the years. Just a few days before he passed, I received an email and text about his latest catch on his favorite bait, a Gulp Minnow.

“Two days ago, caught a musky at Lake Storey to complete my catching every species of fish that swims there on a Gulp minnow.” 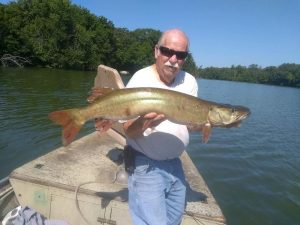 A good man and a talented fisherman, I sure do miss his fish stories.