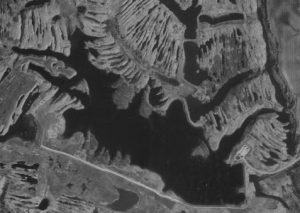 Arguably the primary attraction at Snakeden Hollow is what has variously been called “The Big State Lake”, “The Big Lake” or “Snakeden Hollow Lake” over the years. And for about the first ten years of public access, it didn’t really have an official name. More on that after a look at some details about this interesting body of water.

A little internet research turned up the Illinois Department of Natural Resources Fisheries Status Summary for the lake. That document indicated that the lake “was built in 1978 by Midland Coal Company as their water supply reservoir.” Interestingly, per the IDNR website it is cited as the only lake on the original Snakeden site that was not “formed as the result of surface mining operations.” 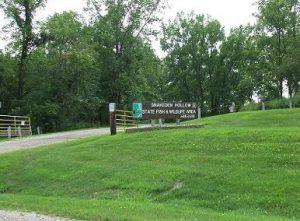 Entrance to the boat ramp on “The Big Lake”

At roughly 165 acres, it also happens to be the only lake on the site that features a boat ramp. The remainder of the lakes are walk-in/drag-in access only but those spots will have to wait until another week to get their due. Maximum depth is listed at 65 feet per the IDNR and the water clarity is downright amazing. In fact, it is rather eerie to sit amidst a patch of standing timber or look down into the water to view sprawling treetops as you sit in 50 or more feet of water. Back in 1990 I got to participate in a bit of fisheries data collection on the lake that included Secchi depth readings. Readings on the big lake at that time exceeded the 20 foot range in some locations, truly remarkable (see Secchi disk info below). Over the years, the turbidity of the lake has increased to some degree. However, it still sports the clearest water clarity that I have ever observed on any fishing hole.

A Secchi disk is lowered into the water and a depth reading recorded when it is no longer visible from the surface.

After more than a decade without a formal name, the lake was dedicated as Lake McMaster in late 1999. It bears the name of the late, longtime Illinois State Representative, A.T. “Tom” McMaster (1918-2002) who was instrumental in the state acquiring the Snakeden Hollow property from the Midland Coal Company in 1987. The naming of the lake was noted in the 2002 Illinois State Senate Resolution referenced below marking his passing.

WHEREAS, Representative McMaster was active in State and
local politics for 33 years, starting in 1952 as township
assessor, and served on the Knox County Board of Supervisors
for 10 years, serving as chairman for four years; in 1971, he
began the first of eight terms as State representative of the
73rd District of the Illinois House of Representatives and
was known for his work with land reclamation and strip mines;
he retired in 1987; and 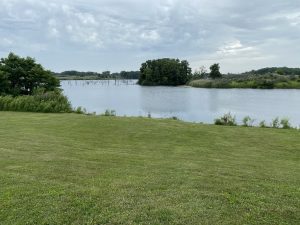 Of course, there’s a lot more to the “The Big Lake” than just history, dimensions and water quality. You know, things like rules, species, structure and yes, some fish stories. And there’s also more to Snakeden Hollow than just “The Big Lake” so stay tuned to the blog for more Snakeden lore. Talk to you later. Troy