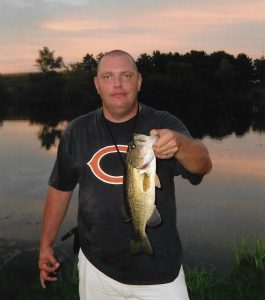 A pair of recent Friday Flashbacks hearkened back to 1985 and included mention of a few high school friends and fishing partners. One of those co-anglers is featured again today as we were fortunate to be casting together again 25 years after those days back in the summer of ’85.

Forty two days between bass during the summer is not really a good thing if you cite bass fishing as a hobby. But such was my plight, fortunately due to not fishing as opposed to being completely inept. On Wednesday evening I got a chance to hit a subdivision pond with John and Brady Junk to see if we could fool some bass before dark. Here are the stats followed by a few highlights. 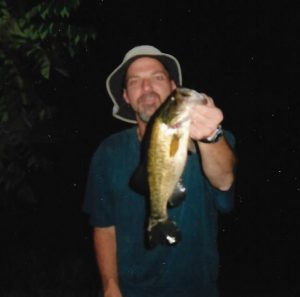 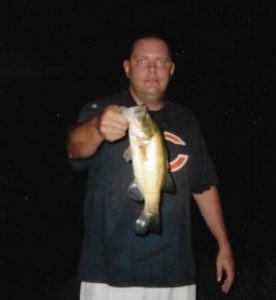 Respecting Your Elders – On this particular trip, Brady, the lake record holder (6-8 bass), deferred to the old guys. John and I each landed a pair of bass as Brady chose not to embarrass us. John did offer a bit of a taunt in claiming that he’d actually caught the lake record and simply allowed Brady to hold it for the picture. Brady argued otherwise and I was left believing the original report. After all, I’ve known John for many years and have learned be on the alert for a fish story whether or not we’re talking fishing.

Wearing Out My Welcome – John also commented to Brady that I wouldn’t be allowed to come back due to outweighing his catch by a mere three ounces. I posted a 2-2 and a 1-14 while John’s bass tipped the scales at 1-15 and 1-14. I think he was joking.

Other Bites – I did have a couple halfhearted hits on the Zara Spook and one that blew the lure clear out of the water. Following the latter strike I tossed in my Senko and the 2-2 bass came through just like he’d been schooled in Bass Fishing 101. I love it when they make you feel smart. While the bass bite never really materialized, the mosquito bite certainly did leading to a sort of “swat, twitch, swat” Senko retrieve. 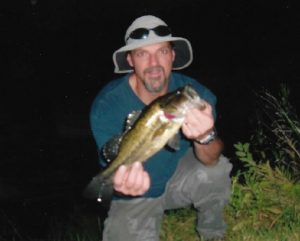 A Potential First – At one point, John commented that it was likely the first time that he’d provided me with access to a fishing hole. In the past we’d either both had memberships/permission, gained access through friends or I’d brought him along. Whatever the case, I’m always up for a new spot and definitely enjoyed the brief visit. Too bad he’s threatened to not let me come back; did I mention that I hoped he was joking?

It’s funny though, as ten years later I haven’t been back on the lake.

Of course, a lot has happened in those ten years. As co-pilots to our wives, we’ve guided a batch of kids through the multitude of activities and events associated with their various stages of growing up. Here in 2020, those commitments remain top priority for these two old fishing partners with my bunch still requiring a bit more attention as they work towards increasing independence. (Note: I even added one more kid since that fishing trip back in 2010.)

So, while a return trip hasn’t materialized, it’s clearly more about life than about barely outfishing the host. Talk to you later. Troy