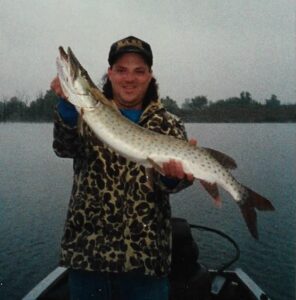 As an avid angler, I remember a lot of fish and a lot of the details of the catches. In the case of my first muskie, I certainly remember the basic details but there was much more beyond the catch.

This fish came from Snakeden Hollow’s Lake McMaster while on a fishing trip with Dad back on September 23, 1997, at 7:50am. The lure that fooled the fish was an old favorite, the Zara Spook in the black shore minnow pattern. Nowhere near what would be considered a “trophy” muskie at thirty-three and a half inches but as my first muskie it sure brought a smile to my face. 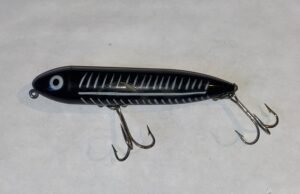 And after the previous couple of days of outdoor activities, I needed a smile.

Two days earlier, I had launched the boat on Lake McMaster and never made a cast. I pushed off from the ramp only to discover that there was an issue with the trolling motor. As a result, I was dead in the water having no fuel in the tank for the thirty-five-horsepower outboard motor as the lake had a ten-horsepower limit. Fortunately, the light breeze did not move me far from the ramp and I was able to paddle back with the emergency paddle kept in the boat. I fooled around with the plug on the motor at the front console without any success. Although I had planned on a camping trip, my frustration sent me back home with a broken boat.

The following day, Dad and I were able to determine that the trolling motor issue was a fuse problem and got things back in working order. As such I decided to resume my camping plans at Little John and Dad would meet me the next morning with the boat for another shot at Lake McMaster.

Things continued to go poorly with overnight rain that lasted into the morning as I waited in the tent for Dad to arrive. Once he arrived, I elected to wait in his truck as the rain kept falling and we pondered our plan. Well, we were determined to fish, so we visited in the truck until the rain began to fade. As we were planning on fishing through lunchtime, we needed to make some sandwiches from the provisions that I’d packed in the cooler. We still laugh about sitting in the truck making our lunch.

Eventually, we launched in the light rain, and after only a handful of casts, I had my first muskie in the boat. Proof that even when things aren’t going your way, keep on casting as sooner or later, good things will happen. 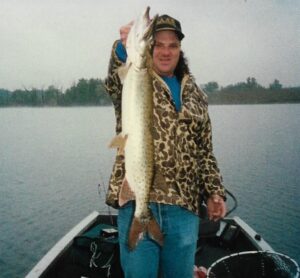 I’ve caught more than a dozen muskies since that first catch (mostly all “accidents” while bass fishing like today’s flashback fish), some bigger, some not. I will never be a muskie angler as there are just not enough bites and the pursuit will physically wear you out. But for one morning, I kind of looked like one. Talk to you later. Troy