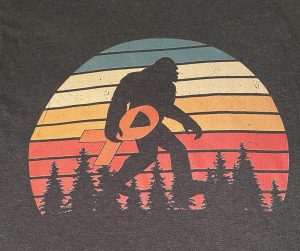 October ends with a nod to the spooky, strange and mysterious with the annual Halloween celebration. However, I also like to reflect on another earlier October observation that I recognize as “Bigfoot’s Birthday”. Of course, no one really knows when Bigfoot was born or if such a creature even exists but bear with me here as we stray a little off the beaten path.

While the legend of the wildman in various cultures dates back for centuries, I view Bigfoot’s Birthday as October 20, 1967. For it was on that date that Bigfoot strode out of the fringes of human habitation and into the collective imagination. All courtesy of a video known as the Patterson-Gimlin film. Just under sixty seconds of footage of a large, hairy, bipedal creature sauntering along the bank of Bluff Creek in Northern California.

And the rest of this strange bit of footage is history and mystery.

I was introduced to that intriguing and controversial clip in 1976 as a wide-eyed kid watching the hulking creature stride across the big screen in Galesburg’s West Cinema. The feature was a documentary entitled The Mysterious Monsters. It startled from the start as Peter Graves of Mission Impossible fame stated, “The facts that will be presented are true. This may be the most startling film you’ll ever see.” Throw in some ominous music, campy reenactments and Frame 352 where Bigfoot turned to look right at me and I was hooked. I was also in for a few restless nights on our dead end street bordering Cedar Fork on the west edge of Galesburg.

My fascination with the prospect of such a creature wandering the woods and eluding capture was further fueled at Steele Middle School. For better or worse, the Weekly Reader book order listings and traveling RIF (Reading is Fundamental) book giveaways were rife with offerings on the subject. Over the years, I amassed a fair collection of books on the Bigfoot mystery and various other phenomena often classified as pseudoscience.

The 70s were the heyday of Bigfoot including a prior big screen appearance in the 1972 documentary style film, The Legend of Boggy Creek. On the small screen, Bigfoot tangled with Steve Austin, aka “The Six Million Dollar Man”. And, when it gets right down to it, Chewbacca is pretty much an intergalactic Bigfoot who developed a partnership with humans long ago in a galaxy far, far away. Bigfoot later peddled Pizza Hut pizza and these days Sasquatch sells beef jerky. I sure hope that he is getting a cut from the latter product as it can get a bit pricey.

And lest you think that a Bigfoot encounter is something that only occurs far, far away from Illinois, you might want to have a look at the Bigfoot Field Researchers Organization (BFRO) database. Yep, there’s Illinois in the list of state by state reports with 297 entries. Among the counties included are Fulton, Hancock, Henderson, Henry, Knox, McDonough and Tazewell. The list of communities near which these encounters took place consists of Altona, Canton, East Peoria, Gulfport, Hamilton, Kewanee, Lewistown, Pekin, Vermont, Victoria and Warsaw. However, my favorite report comes from a spot called Rozetta in Henderson County. For years, my family roamed a remote section of timber while camping, hunting, trapping and fishing right in proximity to the May 2008 Report #23949 on the BFRO website. Kind of makes the hair on the back of the neck stand up when reading a report from an area I’ve visited since the early 1970s.

Then there’s something called “The Cole Hollow Road Monster”. This purported hairy creature prompted several hundred calls to various Tazewell County law enforcement bodies during the spring and summer of 1972. During those wild few months there was the prospect of administering lie detector tests to witnesses, an accidental shooting amongst a posse of searchers, a creature spotted swimming in the Illinois River and a report of strange lights descending in the vicinity on a night in late July.

Admittedly, I am a bit more skeptical these days than the nine year old kid sitting in the dark with a soda and popcorn at the West Cinema. However, just as I am about to give up, something pulls me back in. In the end, it’s kind of fun and a little spooky pondering whether something has been out there watching me over the years as I trekked through the woods. The prospect brings back some welcome childhood naiveté and gives the imagination a bit of exercise as you look back over your shoulder, sensing something is following you out there in the woods (also see Frame 352 of the Patterson-Gimlin film).

So, Happy Birthday dear Bigfoot and may I suggest you celebrate with an evening hike through the woods and some beef jerky. Talk to you later. Troy