Fulton County, IL has a wealth of strip mine fishing holes, but for most of them, you’ve got to have some connections. Once upon a time, I had such good fortune as my aunt and uncle on my wife’s side were caretakers at what we called “The Guesthouse” on the Buckheart strip mines. Several Easter weekends were spent down there packed with family, food, and just a little fishing. Below are a pair of excerpts from the original 2006 fishing reports along with some pics and log entries.

April 15 – Day One of the Easter weekend fishing trip to Buckheart produced thirty bass, along with my first ever northern pike and a crappie. My biggest bass came in at 3-4 on a 5” Yamasenko wacky rig (watermelon) and the northern pike hit a Smithwick Suspending Rogue jerkbait (copper). My collection of fish came on a Mann’s 4- crankbait (blue/chartreuse), a jerkbait (red/yellow), a #5 Mepps (rainbow/white) and a 5” Yamasenko wacky rig (watermelon). The rest of the crew also boated a batch of bass, a handful of northerns and got into a good crappie bite on one of the lakes during about seven hours on the water. I fished in a boat with Uncle Fred (his bass included a 2-12 and a 2-13) while my brother-in-law, David, paired with his son, Dylan and Uncle Donnie shared a boat with his friend Rick and Uncle Ted at various times. Of course, we took a break for an excellent lunch with Aunt Phyllis in charge of the kitchen.

April 16 – Day Two consisted of just under four hours of bank fishing for me, David, and Dylan. Uncle Fred and Aunt Laurie had gotten up a bit earlier, so they got in a little more fishing. It paid off as Laurie landed a 5-4 walleye on her first cast. I ended up with eighteen more bass (heaviest was 2-7) and three more northerns. Top lures for me were the Mepps and a buzzbait (blue glimmer). David caught a pair of bass in the five-pound range on a Zara Spook but didn’t get official weights. Most everybody else is normal and just fishes for fun although Fred did play along as I recorded our fish and snapped a few photos while we shared a boat. I had a great time, enjoyed the company, and hope to do it again in the future. 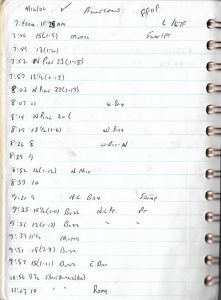 Certainly, one of those fish stories that begs the saying, “those were the days.” Fishing access dried up over the years, but the fond memories are what “Friday Flashback” is all about. Talk to you later. Troy