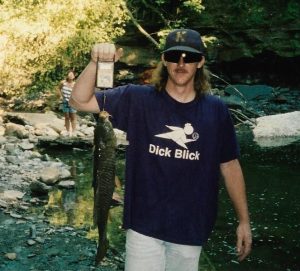 The evening of June 27, 1996 at the Lake Bracken Spillway was like night and day for a group of carp anglers. The carp that called the spot home were sometimes an odd bunch. Some days, you could see several swimming below the surface from high atop the ridge as you looked down into the pool. And then not even get a bite.

Other times, no fish were to be seen from above, but the bite would be well worth navigating the tricky path down to the promised land. Of course, that was also part of the fun. From the sneak peek from up top to the tentative steps needed to maintain balance when armed with a couple poles and cooler of beer to the slight hop for the last step on the dirt descent to The Spillway, it was always an adventure.

On this trip, the carp chasers consisted of myself, my brother, Brent, and our friends, John and Lisa Junk. Us three guys had established ourselves as some solid carp fishers with a dozen years of experience at The Spillway dating back to high school. As for Lisa, well, she had been designated “The Carp Queen” following an impressive 1994 performance when she outfished the guys.

However, even Lisa’s 1994 success would pale in comparison to Brent’s domination on this trip. All told, he caught over thirty pounds of carp, easily outdistancing the rest of the crew. In fact, neither John, Lisa nor I caught a single carp. I’ve never seen anything like it. Quite odd as we were all using the same bait and fishing The Spillway was akin to the old fishing in a barrel adage.

All these years later, I still don’t have a true explanation for the discrepancy in fish catching. Sure, Brent is a skilled angler, but the rest of us are no slouches. The best I can come up with is that while Brent was more than willing to assist with hauling any of the gear, beverages and supplies down the slope, he always left the beer alone. For the rest of us, I’m not sure that we would have traded in our cold ones for a couple carp back in the day. Speaking for myself, I believe I was simply content to knock back a few and enjoy the show. Talk to you later. Troy