There’s a spot at Snakeden Hollow called “Bearclaw Lake” that was a popular stop for me during the early years after the site opened to the public back in 1990. The trio of Bearclaw bass below come from thirty years ago, and while not trophies, I still consider any bass at two pounds or better to be “a good one.” Each of these three fish made that mark and totaled just over seven pounds. 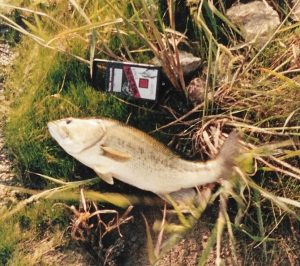 Bearclaw Lake at 2-12 in the days before “selfies” 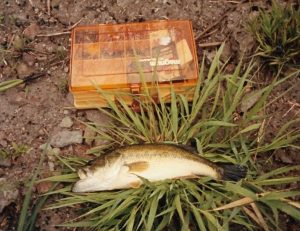 Bearclaw Lake at 2-6, not really a keen idea for a photo 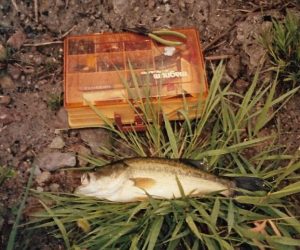 Bearclaw Lake at 2-4, my apologies to the bass, I’ve learned a thing or two over the years

According to the back of the pics, they were all fooled by a lure called the “Dying Flutter”, something that I classify as a propbait. These wooden lures were somewhat of the predecessor to today’s popular Whopper Plopper. The Dying Flutter was crafted by Heddon Lures and featured props fore and aft on the lure body. From a brief internet search, it appears that these baits are no longer in production. Strange thing is, I also cannot find any in my tackle collection. Instead, I have several other 80s propbaits called the “Devil’s Horse” that are still made by the Smithwick lure company. Perhaps I made an error in identifying the lure on the picture backs all those years ago. And that’s more or less the last time I threw these particular lures. 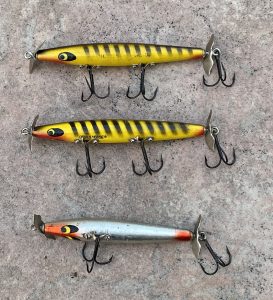 Now, there’s nothing wrong with these baits and I had a blast fishing them once upon a time as topwater strikes are about as exciting as it gets. But, like many lures and trends, I shift gears and a presentation gets left behind in one of the multitudes of utility boxes in the garage. Thinking back on my experiences with the Dying Flutter/Devil’s Horse, there’s a tale or two to tell, but those are for another day to keep this post concise.

Just as lure trends change, so has the landscape of Snakeden Hollow. Over the last 30-plus years, Bearclaw Lake has seen significant changes in terms of bank accessibility. A lake that once presented ample bank access to hit all the “good spots” has now become quite a challenge for a bank angler due to vegetation, both terrestrial and aquatic. I have hit it a few times in the last five years along with my brother on at least one occasion. While we’ve posted solid numbers, the quality bass of yesteryear have been lacking. Maybe they’re gone, maybe they’re wiser, tough to say. Perhaps some more sampling is needed. 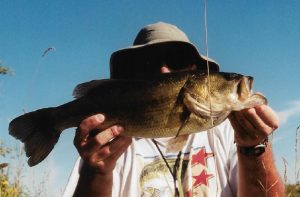 Bearclaw Lake Top Bass at 3-15 from 20 years ago, better job on the photo, too

I’ll close with the pic above of the Bearclaw Lake Top Bass, landed 20 years ago on August 14, 2001. It was also a topwater catch, coming on the legendary Zara Spook. Good times on a good lake and those topwater strikes sure leave a lasting impression. Talk to you later. Troy