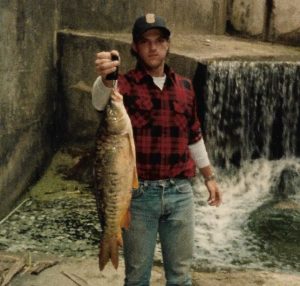 Ah, yes, the good old Lake Bracken spillway back in the early days of access and carp chasing. We’ve been here before in Friday Flashback but there’s always plenty to write about when reminiscing.

For starters, these shots are from back in the thermal and flannel days. Not a bad fall look even today as far as my limited fashion sense goes. Practical for the cool fall days and a rustic, somewhat rugged look perfectly suited for outdoor adventure.

Throw in a Galesburg Silver Streak baseball cap and a wad of Red Man or Levi Garrett in the cheek for good measure (can you still say “Red Man” these days?). Yes, I guess once upon a time I thought I was a baseball player. Don’t know the last time I tried to hit or throw a baseball and grateful that I eventually kicked the chew habit sometime in the mid-90s.

As far as the catch, those carp were a blast in The Spillway although they could be kind of strange at times. Some days they were on fire, others it seemed like there was nobody home. Some days only one person caught them and other days several anglers got a piece of the action. I also don’t know how they replenished in that small pool as it did not appear that we were repeatedly catching the same fish. In fact, the specimens here are unique and look like what are called “mirror carp” as the scales are not uniform but rather irregular. 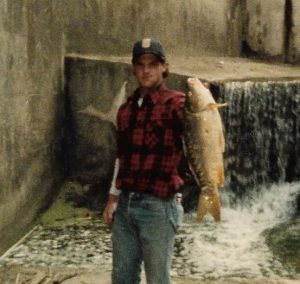 Fun pics for me to pull out of the album for a flashback but I wish I could recall who had tagged along to serve as the photographer. Likely, it was either my brother, Brent, or one of the Junk brothers (John or Mark) as we spent more than a few days down there trying to tempt those bugle mouths. But since the only pics from the outing are me, I would guess it wasn’t Brent as he generally outfishes me. The Junk brothers on the other hand…just kidding (sort of).