With three fishing trips in five days, it’s hard to keep up with the fishing reports here on the blog. Today, we have Part II of the fishing report from last week’s outing with Dad/Papa and my boy, Jayce. While Part I focused largely on the peripherals, Part II resembles more of my standard report. 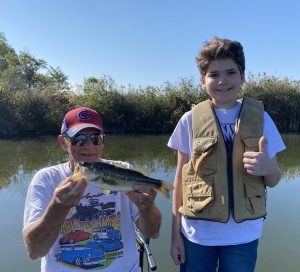 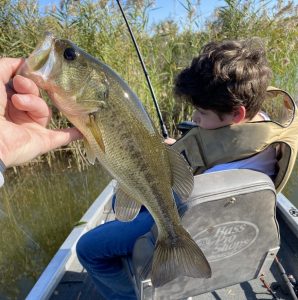 Guesstimation – I’ve touched on this contest before, most recently on a Lake McMaster outing with my brother, Brent. For this trip, Papa read my mind and had each of us make a guess regarding our success as we drove to the fishing hole. The pic below is the official document and reading from top to bottom each angler predicted our total number of bass, a species count, a Top Bass weight and Total Weight for all of our bass combined. For this outing we opted to weigh every bass instead of only recording the Top 5 meeting the 12” minimum length criteria. 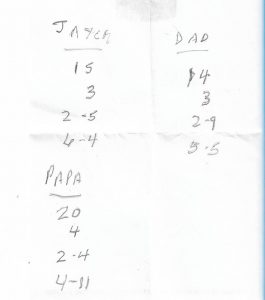 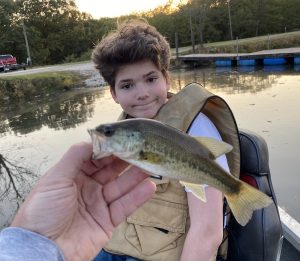 5:10pm – we weighed them all and this one registered at five ounces

And The Winner Is – I guess that I would have to go with Papa for the victory as his weight prediction was only a mere ounce from our actual total. The rest of our estimates really didn’t pan out as our two fishing holes proved to be a bit finicky. I did toss around a Gulp minnow on a jighead hung from a bobber but found no takers among the panfish. Top Bass also fell well shy of our hopes which was also unfortunate as it is extra cool to get a nice fish with a young angler onboard. 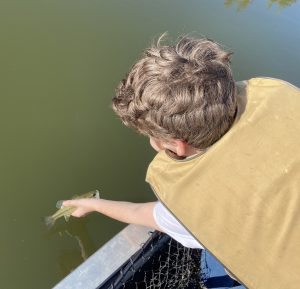 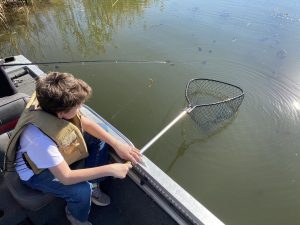 The Extras – I’m not sure on the ratio, but me and Papa made substantially more casts than our young angler. On the flipside though, we spent a lot less time dunking the dipnet, examining/releasing our catches and collecting aquatic vegetation. It’s all part of the “make your own adventure” aspect of a fishing trip or an outdoor outing in general. You just can’t beat it when your boy says, “This is fun” during a fishing trip at a point when he hasn’t even made a cast for probably fifteen minutes. And even better as he honestly wasn’t missing much in terms of catching. 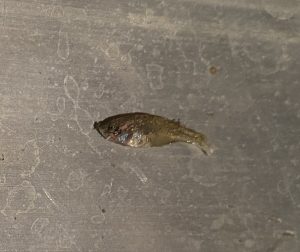 A most excellent adventure with quality time for three generations on what Jayce described as “the longest fishing trip I’ve ever been on.” Indeed, at roughly three hours on the water, I believe we set a new record (and that does not include the roughly two and a half hour combined truck time). Later that evening, I was further rewarded as I overheard Jayce telling his sisters about the day on the water. Mission accomplished. Talk to you later. Troy