In today’s post we take a look at the initial stages in the overall process of the complete Citizen’s Lake fishery rehabilitation. The rehabilitation project actually accomplished a pair of aims. For one, the lake was to be enlarged via digging and dredging with the fill dirt being used to expand the nearby highway to four lanes. The highway construction project, in turn, allowed for a “do over” on the fish population that was suffering due to an infestation of the common carp. 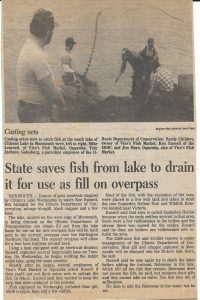 To begin the rehabilitation, a valve on the overflow was opened in order to drop the water level. Inevitably, some of the fish population would escape through “the tube” as noted by fisheries biologist Ken Russell in a newspaper interview at the time. Electrofishing was then employed in order to salvage any remaining desirable fish species. During electrofishing, a current is delivered into the water which effectively stuns those fish in proximity. While stunned the fish generally float up to or near the surface where they can be captured with a long handled dipnet. The “shock” does no lasting damage and in most cases you have to be pretty adept and quick with the dipnet to capture the fish before they regain their senses.

The primary species that we salvaged for relocation was the largemouth bass. I believe that some crappie and bluegill were also collected along with a solid individual walleye. The latter was likely a transplant from the Mississippi River as the species was not intentionally stocked in the lake. I do not recall if we rescued any catfish as they are not as susceptible to the shock. Their smooth skin makes them more elusive than their scaled counterparts in a fishery.

Once collected, the salvaged fish were held in a fish truck loaned out from the Jake Wolf Fish Hatchery in Tazewell County. Those fish were then relocated to several area waters. If memory serves me correctly, these included Lake Storey, Snakeden Hollow’s “Big Lake” (now known as Lake McMaster) and possibly Gale Lake in East Galesburg. What I do remember though, was that it was pretty cool taking the fish truck home at the end of the day and then getting to drive it back to Jake Wolf the following morning. Once we had done our best at collecting our quarry, Vice’s Fish Market out of Oquawka, Illinois arrived to harvest the common carp that remained. This was done by seining with a large net and it was quite a bounty. The visual image of several truck beds filled nearly to the brim with slimy, squirming carp still brings a smile.

Along the way, a couple local papers showed up during the time that we worked on the project. I was able to snip one of the articles from the Galesburg Register Mail while Ken Russell was kind enough to grab me a couple from the Monmouth Review Atlas. I will always be grateful for those gifts as the old yellowed pages sure mean a lot to me all of these years later.

More on the project to come so I hope you’ll stop by as the reminiscing continues. Talk to you later. Troy