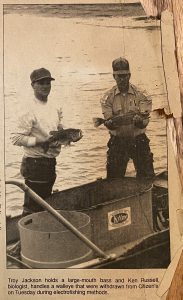 I must admit it was kind of cool to see myself in a local paper during the Citizen’s Lake rehabilitation project. Honestly though, what was even cooler was hanging out with that other guy in the above photo.

Fisheries biologist, Ken Russell, was the primary caretaker of all of the local fishing holes where I cut my fishing teeth. By 1990, I would guess that he probably had twenty-five years of fisheries work on his resume.

And you talk about still going strong at that point?

Sure thing, as the Illinois taxpayers got their money’s worth out of that man. His work ethic was unmatched and he gave me a work out during the month or so that I had the honor of being his sidekick. His grasp of his craft was incredible and I was always impressed with his willingness to answer any question I had as we traveled between fishing holes on the roads of West Central Illinois.

Prior to the Citizen’s Lake project I had been able to work with Ken on a couple other occasions as a volunteer fish dipper during some electrofishing surveys. Thanks to a mutual friend at the Galesburg Park Department where I worked college summers I was able to get those evening gigs. Once upon a time, that mutual friend told me that Ken ranked me as his second best fish dipper of all-time.

Seems that Ken was a popular subject for the local papers

Who was the best fish dipper, you might ask?

Of course, it was that mutual friend. I still take it as a feather in my cap, you may take it as you wish.