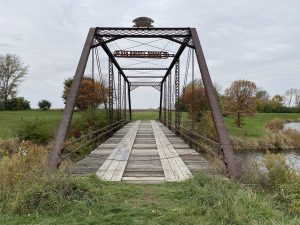 Spanning a channel between the north and south sections of Citizen’s Lake is a bridge. Back in 1990, the bridge resided elsewhere in Warren County and was slated for eventual demolition. However, regional fisheries biologist, Ken Russell, was on board to get the bridge relocated rather than removed. While I was aware of the proposal, I had no idea what the bridge even looked like, let alone the prospect of actually relocating such a structure. 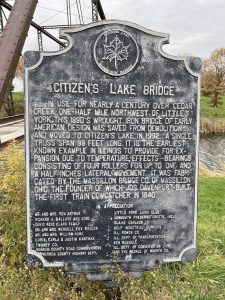 The plaque above notes that the dream became a reality in 1992. Later, in 2016, the bridge from the 1890s was dedicated as “Ken Russell Bridge.”

It’s been a fun walk down Memory Lane in revisiting a bit of the history of Warren County’s Citizen’s Lake. My aim for the blog has always been to educate, entertain and escape. Hopefully, this collection of posts was able to cover all of those bases. Talk to you later. Troy