A weekend camping trip along the historic Hennepin Canal afforded the opportunity to make a few casts. The heat was on with a blast of summer weather a few weeks early, but a handful of fish made it worth our while.

No giant, but my first Hennepin Canal bass was still rewarding

Paddle Fishing – A midday canoe rental found me, Carly and Jayce paddling through the weed choked waters in the 90-degree heat. We had a goal to reach a nearby lock and an hour to make the round-trip. Reaching the lock, I figured that we had time for some casts in the open water of the deeper pool and the first cast was a winner for my boy, Jayce. A solid canal catch made for some smiles, some excitement, and a proud dad before we turned around for the return paddle to the launch. 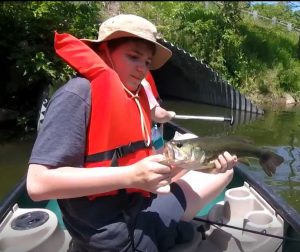 New Species – Later in the afternoon, I tried my luck from the bank armed with a Senko for bass and some waxworms for panfish. Along the mossy bank of the canal, I found a couple open spots with a batch of panfish on beds. While they weren’t very cooperative, I did manage to fool a few, including my first ever pumpkinseed. This attractive member of the sunfish family was a cool and unexpected catch. 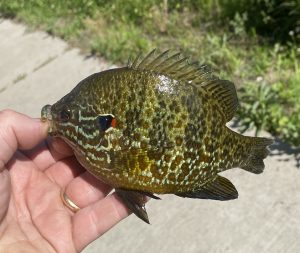 Top Bass – As my limited casting time window was winding down, I spotted a decent sized drum cruising in and out of sight in front of me. I dropped the Senko and waxworm in its vicinity numerous times along with reeling a crankbait past but not even a glance from my quarry. With only a few minutes of fishing time remaining, however, my Senko got a thump and a decent bend in the rod when I set the hook. For a moment, I thought the fight is on with my sought-after drum, but the catch turned out to be a 1-10 bass instead. All good. 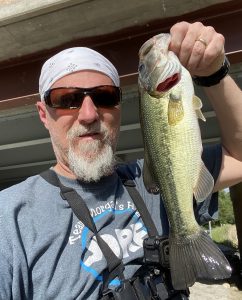 Overall, a fun hour or so fooling around on some new water. I also made a few discoveries along the way that may bring me back to the canal with a few poles in the future. Plenty more to the weekend family adventure but those are tales for another post or two. Talk to you later. Troy